Mongolia’s westernmost province, remote Bayan-Ulgii, is where the Altai Mountains unite Western China, Russia, Mongolia and Kazakhstan. Here on the rocky ridges overlooking the snow-dusted steppe, a dwindling number of ethnic Kazakhs living in Western Mongolia carry on a 6,000-year-old tradition, hunting with magnificent golden eagles, one of the world’s largest predatory birds.

The 21st century has seen the inauguration of an annual Golden Eagle Festival, meant to celebrate and support the all-but-lost art of eagle hunting, during the first week of October. At the festival, the eagle hunters, called berkutchi, display their birds’ speed, skill and training, as well as the deep bond that forms between bird and human.

Steppe nomads have used birds of prey for hunting for thousands of years. The birds’ keen eyesight and ability to survey the grasslands from far above give them an advantage that humans were able to harness to their own ends. Today, youngsters are being taught to tame and train their own birds, and enter the competitions to test themselves and their birds. In a recent years, young women have entered the sport and begun training in a discipline that had been exclusively male up until a few years ago, when the first female eagle hunter took part in active competition.

MIR travelers can experience the annual festival first-hand on our small group tour: Mongolia’s Golden Eagle Festival. Travelers can attend the annual Golden Eagle Festival, where the eagle hunters display their birds’ speed, skill, and training, as well as the deep bond that forms between bird and human. Along the way, explore Mongolia’s capital, Ulaanbaatar, with its Buddhist and nomadic heritage, and the fabled Gobi Desert.

The official opening ceremony begins with the participants parading onto the field on horseback, carrying their hooded eagles. Each hunter displays his handmade hunting outfit, his horse’s ornaments and his bird’s accessories. The most elaborate and beautiful clothing and accessories are given the highest points.

The hunters take pride in the handmade tomaga, the hood that covers the eagle’s head and helps to domesticate it; the bialeye, the protective glove that the eagle perches on when it’s being handled; and the tomach, the special hat made of fox-fur that signifies an eagle hunter.

In the afternoon, the golden eagles are evaluated for their speed and agility. Each eagle is released from a cliff as its trainer rides below, signaling for it to return to him. The birds with the fastest times and best technique in landing on the arm of their mounted trainers are awarded the highest scores. (Occasionally a young bird has to be shown a fresh rabbit carcass to convince it to return.)

The next day’s competition finds the eagles attacking fox skins dragged by their trainers on horseback. Judges evaluate their skill at hitting the target, their diving speed and gripping technique. This is what birds of prey are made for, and they are naturally gifted at this form of hunting.

The Home of the Golden Eagles

Golden eagles can be found throughout the northern hemisphere. They prefer open areas like the Mongolian steppe, though they have adapted to woodland and forest up to about a 12,000-foot elevation. They have a lifespan of 35 years in the wild. Kazakh eagle hunters often set their birds free after a certain amount of time in captivity.

Travelers at Ulgii’s Golden Eagle Festival stay in a temporary ger camp, and can ride horses, explore the rolling hills of the steppe and meet local families to learn more about the Kazakh culture and applied arts. Kazakh women are renowned in Mongolia for their skills in embroidery and appliqué. Hand-crafted felt carpets and embroidered tapestries typically decorate their homes.

Kazakh horse-games, such as ulak tartysh (or buzkashi as it is called in the Pamir Mountains of Tajikistan), a sort of polo played with a goat carcass, may also be on the agenda during lulls in the action.

More photos and info about Mongolia and the Golden Eagle Festival: 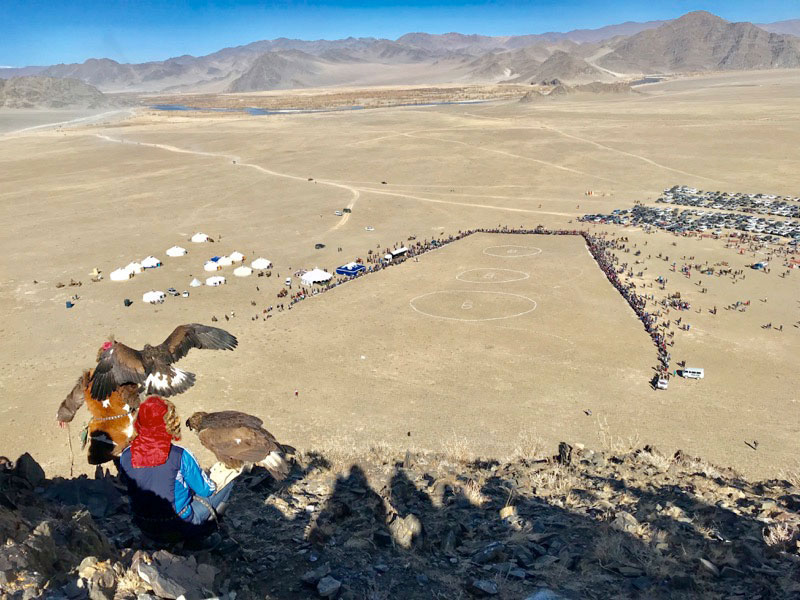 Travel to Mongolia with MIR

MIR has more than 30 years of experience handcrafting tours to Mongolia. Our full service, dedication, commitment to quality, and destination expertise have twice earned us a place on National Geographic Adventure’s list of “Best Adventure Travel Companies on Earth.”